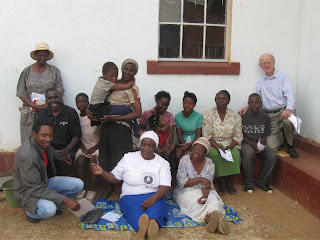 Members of Faith and Light in Kadoma committed themselves to revive the community to its earlier functional state. The community which had died and had failed to meet since 2011, met on Sunday the 11th of August 2013 to map the way forward. The meeting which was facilitated by Tobias Chindime, Fr. David Barry and Time Baluwa had 12 members in attendance.

Mrs. Mhishi who was instrumental in mobilizing the members to meet said that she had invited many young people to come and join the Faith and Light family. She had addressed the whole parish few weeks before the meeting inviting people with handicaps, their families and friends. She made a special emphasis on the need for the young people to join since they are the ones who will carry the button to the next level, the future.   Mrs. Mhishi was very optimistic particularly basing on the good response she got from the young people and families who have children with handicaps. The meeting had in attendance two young people who represented the youths. They apologized for the other members who were not present as they were attending St Pauls’ Day Commemorations which were being held on the same day.

Fr. David motivated the members saying that he was so happy that they had managed to meet. He highlighted that the numbers of the community members did not matter much at this point. What is important is the few interested members to meet and share the gift of Faith and Light. The gift of Faith and Light is wrapped in love, communion, solidarity and joy. He encouraged the old community members to accompany the young people towards discovering the beauty of the movement. Fr. David highlighted that Jesus in the gospels always called for people to repent, meaning change, have a new life which gives among other things, a place where the handicapped are welcomed. However, he was quick to say that it’s not easy and attractive at first sight yet it’s rich once one discovers its beauty.

Some of community members gave testimonies on how Faith and Light brings joy in their lives. Among them there was Carol’s mother (Carol is one of the children who have handicaps) who expressed her need for the community to grow saying that she learnt a lot from Faith and Light. She went on to say that she always felt relieved when people visited her as a group during fourth time. It showed that others cared about her, her family and Carol in particular.

We learnt with great sadness the news of Mai Sadiki, a strong woman and a parent to one of the handicapped children passed on years ago. Her handicapped child Stanley wondered off and his whereabouts are not known.
The Kadoma community will be meeting on the 7th of September 2013. To connect with the community you can call some of the youthful members on the following numbers: Brandon 0738727975 or Monica 0772271077