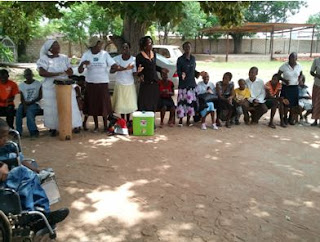 Over 35 community members came together at the St Monica Parish Church in Chitungwiza on the 29th of December 2012 to celebrate the birth of our Lord Jesus Christ. The community members from St Monica put aside all the commitments they had as individuals and they collectively organized a warm experience for the people living with intellectual handicaps, their families and friends.  The party which started at 1000hrs in the morning and lasted throughout the afternoon, was enveloped in songs, testimonies, laughter, sharings and generally words of encouragement to family members and friends who labour each and every day to find the hidden treasures and gifts in people with intellectual disabilities.

On this occasion, Fr David Harold Barry SJ expressed his gratitude to the community members for being united and steadfast in upholding the call of faith and light. He began his sharing by reminding them that   in November, the community members showed the same love and commitment by coming together to welcome Ghislain the International Coordinator of Faith and Light.  Fr David went on to talk about the birth of the Lord Jesus Christ and the pain that surrounded his birth for his family and the community. King Herod at that time ordered all the male children to be killed in an effort to take the life of our Lord. He related that experience to the pain which children are facing in our contemporary world and most importantly those with intellectual disabilities. He called on the community members to continue on their efforts to bring and uphold love and joy in their community. Fr David gave special thanks to the community for making the day possible particularly Mrs. Mutara (Chairperson), Lenard Chipeperengo (Secretary) and Mary who was instrumental in funding the party through the contributions she got from her workmates.

Time Baluwa implored the community to encourage young people to participate and find value in Faith and Light. He applauded the commitment the members have in the works of Faith and Light but reminded them that this heritage should be passed on to the young generation. Time shared his own experience when he joined the Faith and Light family. He was young and many of his friends always teased him that he was going to go crazy like the people with intellectual disabilities. Whenever he said a genuine joke which they would normally laugh, his friends would react differently saying that his relationship with people with disabilities was now getting into his brain. He never lost his love and commitment because he discovered the treasure in the Faith and Light experiences. It is that same treasure which the community should accompany the youths in discovering.

A representative of Life Empowerment Support Organisation (LESO), Mrs Kudyanyemba gave a word of encouragement to the parents who were present. She enlightened the community members on how the organization was started as a response to the HIV and AIDS pandemic. The organization operated more as a Home Based Care organization identifying people living with AIDS and offering care and support as well as mobilizing communal support.  She related that LESO has gone beyond HIV and AIDS issues to focus on any illness that is terminal. Now, the organization reaches out to people who have cancer, orphans and disabilities. Mrs Kudyanyemba emphasized the need to identify children who are stigmatized and hidden in homes because of their intellectual disabilities. She went on to do something very brave. Mrs Kudyanyemba disclosed her HIV+ status stating that she almost died 5 years ago if she had not been found by people who care from LESO. Faith and Light members should as well identify people with intellectual disabilities and support them. LESO as an organization networks with St Monica Community assisting the community with resources such as wheelchairs.

The children were thrilled to have such a gathering. Music and food was organized to give a merry finish to the whole event. Sister Mary who contributed so much to the organizing of the event made available a big cake which supported the theme “For the Love of God". Indeed the party was an amazing way to end 2012 and welcome the New Year 2013. St Monica is a community in Chitungwiza just a few kilometers out of Harare in Zimbabwe.
Posted by Unknown at 06:06