Faith and Light members get a treat 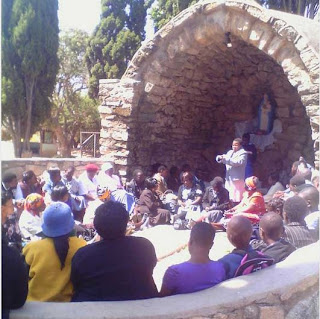 Over 80 children, parents and friends were given a treat of a lifetime at Makumbi Mission on Saturday the 24th. The Faith and Light outing which was organized by Fr. Heribert Muller and Sr. Hilda for the members in Harare and surrounding areas can not be described in any phrase better than to say it was a “total bliss”. The event gave children with handicaps an opportunity to enjoy themselves. It proved that life can be a total bliss even though one has disabilities. The event showed that people can go beyond their differences and challenges and discover a wealth of experiences.

29 members from Mabvuku Community, 15 from Chitungwiza Community, 24 from Glenview Community, 2 from Chinhoyi Community embraced the morning cold to meet at the pick-up point behind Harare Post Office at 09:00. The members were ferried to Makumbi Mission where they were joined by members from Larche Community.  Faith Light members were welcomed by St Hilda and a choir of girl guides who swiftly accompanied the communities to the Grotto. A prayer moment which was led by Sr. Hilda and Fr. Muller followed preparing the members for the day’s proceedings.

The fiesta was amazing. It was enveloped in testimonies, songs and poetry. Most of the activities were performed by the children themselves and they loved it. They smiled, laughed and were happy. All the parents and friends who were present felt the happiness and warmth which was radiating from the children with handicaps and they loved it too. It was “total bliss”. Fr. David Harold Barry used the opportunity to highlight the importance of having young people and friends in faith and Light. He mentioned that there is the need to engage the parishes which the members come from and mobilize other people to join the movement. He showed how their contribution is so crucial to the community life of Faith and Light.

Fiestas usually have food as part of the celebrations and this one was not an exception. Sr Hilda and her crew prepared a treat which was served as lunch. It was “a meal and half”, perhaps best served on Christmas or on a wedding. Well the event was unique in itself and it deserved it. It was really a wedding at Kana.

The outing ended with a prayer in the chapel. Time Baluwa took an opportunity to implore the communities to go and invite friends to join them. He highlighted that Faith and Light movement is losing one of the important cornerstones which is friends. He mentioned that even young people were very few and there is that need to mobilize them since they are the ones who will carry on with the movement. Time went on to talk about volunteerism. He said people can volunteer their time, resources and skills and it is up to the communities to promote volunteerism. Tobias Chindime gave a vote of thanks expressing how grateful everyone is for the wonderful gift which Fr. Heribert Muller and his team had given Faith and Light. Fr. David Harold Barry gave the final blessing.
Posted by Unknown at 03:38